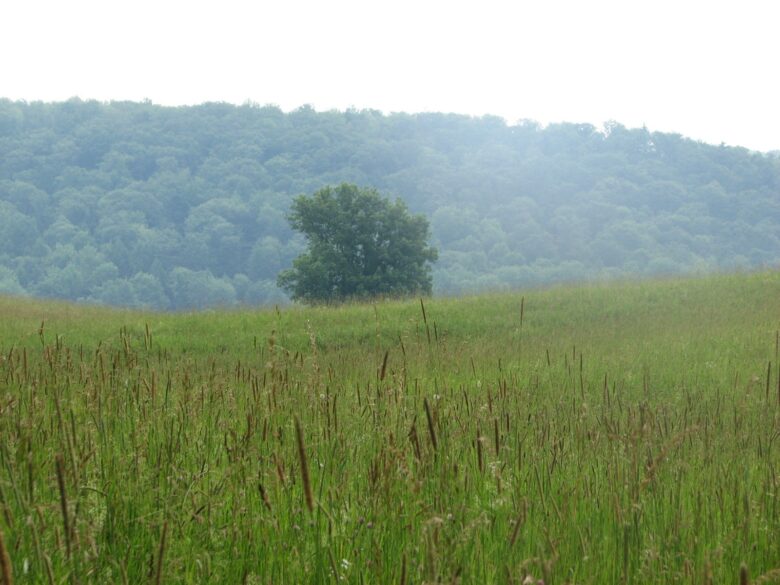 The end of June was nearing and I was preparing for my third hike on the FLT.  I checked my spreadsheet and planned out my next adventure; 16 miles.  My route would begin at Ridgeway Road, climb through Shindagin Hollow State Forest, and turn around at Old 76 Road.  I set out on the drive to the trailhead mid-morning and arrived shortly before noon.  The day was already quite warm, near 80, and humid.

I pulled into the small parking area off Ridgeway Road and parked my car under the shade of some trees.  The picnic table that I had eaten my lunch at on the previous hike was nearby and I sat down on it while I laced up my boots.  I pulled on my backpack and set off toward the back of the open clearing.  The trail turned left into the woods and wound along through the trees before climbing onto an old abandoned railroad bed.

It was steamy and hot, the small trees and shrubs along the edge of the railroad bed made it feel as though I were walking through a tunnel.  The flat and level bed made walking easy and I continued along quickly.  An opening in the trees and shrubs appeared on my left to reveal a swamp.  Bugs buzzed in the hot and humid air and dragonflies flitted around.  One landed on a twig near the trail and I took a few photos before it flew off again.

I continued on down the railroad bed for a short distance and then the trail turned off to the left and entered a field.  Ahead of me was a climb up along the edge of the field.  A small pathway had been cleared along the edge.  I saw a large tree standing alone further up the hill through the haze.  As I crested the top of the climb I could see that the lone tree was next to a road and not in the middle of the field as I had thought.

I came to White Church Road, crossed, and continued on into another field.  There was no cleared path in this field as there had been in the previous one.  A narrow path trampled down by hikers followed along the edge of the field.  After I reached the top of the field I turned back to see the golden-green of the field stretching before me.  I entered the woods and it was cooler under the trees.  The field seemed to amplify the heat and I was glad for the relative coolness of the woods.

The trail started a quick climb of about 100 feet and then eased to a gradual climb as it crested the top of a hill.  After passing the top of the hill it began to descend gently and in a short distance it came down to Braley Hill Road, a narrow dirt road.  FLT markers on the opposite side of the road indicated where the trail should be, but hikers had beaten an easier path a little to the left.  The brown stripe of the trail descended through a deep growth of dark green periwinkle.

Not far from the road I came upon a campsite.  It appeared that it had been used recently.  The dark charcoal of burnt wood lay in a small fire ring.  I continued on past the campsite and soon encountered an old foundation.  A large tree now grew inside of the foundation and greenery had overgrown it.  A few parts of the foundation had collapsed in.

I considered taking some pictures, but decided to wait until I was on my way back.  The trail curved around the old foundation and then turned to follow along the side of a hill with a steep descent on the left.  After following the edge of the hill it turned to the left and began to descend.  Bright sunlight was shinning ahead of me and the trail took a final descent down some natural rock steps to the Shindagin Hollow Road.

A sign across the road on a tree indicated, “Finger Lakes Trail, A Foot Path” and pointed to the left.  I turned and followed the dirt and gravel road around a curve.  The sun was shinning brightly overhead and it was quite warm.  A small stream ran next to the road, mostly dry.  After a short walk down the road I saw a small bridge spanning the stream ahead of me.

The bridge had only three boards running down the middle with railings on each side.  An FLT marker to its right indicate that the trail continued across.  I decided to take a break and eat my lunch here before continuing on.  I sat down in the long grass under the shade of a tree next to the bridge.  After a rest I started out again and crossed the small bridge, the boards felt springy as I crossed.

On the other side of the stream the trail started to climb again.  It rose up through a hollow, hills on both sides of me.  Occasionally I could see another small stream to my left through breaks in the trees.  The trail began to turn toward the stream and I came upon a waterfall.  Moss covered the far edges and water tumbled over the many steps of the falls.

After taking a few pictures I left the waterfall and stream behind and the trail continued its climb.  Twenty minutes later I found myself at South Road, a well paved road with a double yellow line down the center.  The grass along the edges was short and had been mowed recently.  The sweet scent of the grass and the pungent tang of hot road filled the air.

The trail continued along a level path after leaving South Road and then made two sharp turns, one to the right and another back to the left, before beginning to descend.  After descending about 200 feet the trail leveled out once again.  It crossed over little Boyer Creek and then began a small climb up to Old 76 Road.  I arrived at Old 76 Road, it had a fresh coat of pavement and yellow reflectors stuck in the middle where a line would be.

After taking a few pictures I turned around and plunged back into the thick undergrowth along the side of the road.  I crossed back over Boyer Creek and then began the climb back up to South Road.  Along the way I paused to take some pictures; bright red berries hanging below vibrant green leaves, and yellow and red mushrooms.

I crossed back over South Road and headed back down along the stream to Shindagin Hollow Road.  This time I did not stop to take more pictures of the waterfall.  Nor did I stop for pictures of the small footbridge.  It was getting late and I needed to keep moving.  I left Shindagin Hollow Road and continued on up along the edge of the hill.  I soon found myself back at the old foundation.

Even though it was late, I had skipped taking pictures earlier, so I stopped to take some now.  After a few pictures I continued on and was soon back at the camp site.  A little orange eft had crawled onto the charred remains of the fire.  The bright orange against the deep black created a brilliant contrast, so I snapped a couple quick photos before moving on.

Minutes later I came to Braley Hill Road and continued on across and up a gentle climb to the top of the hill.  After passing the top of the hill the trail began to descend quickly before opening out into a field to the east of White Church Road.  The sun was low and cast the edge of the field into shadow.  I took a few quick photos and then continued on down along the edge of the field.

After crossing White Church Road I made my way down through the next field.  I was tired and it was still quite hot and humid.  Maybe it was because I was tired or perhaps because I was coming from the other direction now, but I had to search to find where the trail entered the woods at the bottom of the field.  A few moments of searching and I found it and headed into the brush before climbing up to the old railroad bed.

I was glad that the last part of the trail was on the level and easy-to-walk old railroad bed.  It allowed me to move along at a good pace and I was soon turning off and leaving it behind.  The trail wound through the woods and finally opened out into the grassy area at the back of the parking area.  I could see my car ahead of me.  I climbed up a little hill at the back of the area, my feet hurting and sore.

After putting my backpack in the car and changing out of my boots, I sat down at the picnic table to relax and have something to drink.  The sun was low and the area was now in shade, but it was still warm.  I wanted a quick rest before I got into my car and made the drive home.