The Fourth Hike (Hike With A Friend) 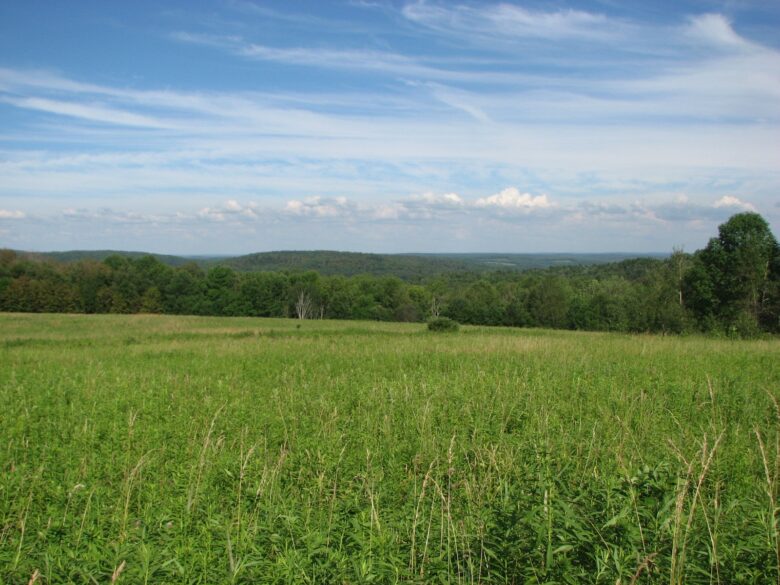 Fourth Hike (Hike With A Friend)

Author’s Note: I am writing this in December 2017 and much has faded from my memory, but I am recording as much as I can remember.

I had completed three hikes on the FLT and had told my friends about the trail and the experiences and scenery.  My good friend Tim was interested in joining me on a hike.  He also wanted to lose weight and get in shape.  High blood pressure and heart disease were common in his family and it was time to make some changes.

We arrived at our starting point on Old 76 Road late morning on a warm and sunny beautiful mid-summer day.  I pulled my car over onto the shoulder of the road and parked.  After putting on our boots and shouldering our packs we set off on our 11 mile hike.

The trail led us up an old tractor path along the edge of a field.  It turned to the left and continued to follow near the edge of the field until it plunged into the woods and left the field behind.  We continued on straight ahead climbing gently up a hill until we came to a sharp right turn.

After making the turn the trail continued  straight ahead occasionally making a few small jogs.  We came to a turn to our right that descended down a small hill and then turned back to the left to climb up again.  The trees began to thin and we came to the top of what had been a field long ago; it was now overgrown with shrubs and small trees.

After passing across the top of the old field the trail took another sharp turn, this time to the left and began a small climb.  After a short climb the trail turned and began to descend gently.  We arrived at Level Green Road a short time later.

Level Green Road was a small well-traveled dirt road.  The sun shone down through the trees casting speckled shadows across road.  The air was warm with summer smells.  We decided to take a short break here.  I laid my walking stick down at the edge of the road and took pictures of the road and the trailhead.

We arrived at Blackman Hill Road a few minutes later and set our packs down in the wide grassy shoulder next to the road.  This road was a paved road with a double yellow stripe down the middle.  As we sat at the edge of the road a few cars passed us by.  After a rest we headed up Blackman Hill Road looking for the turn.  We found a pair of white blazes and an arrow painted on a tree pointing up through a field with tall grass.

After entering the woods the trail began to descend gently as it wound it was way along under the cool shade of the trees.  In one area we passed through a carpet of small green plants.  The ground was completely green except for the small sliver of brown that the trail carved through the plants.

The trail began to descend more and angle along the side of a steep hill.  In several places the trail was only a narrow sliver and we had to pick our way carefully to avoid sliding down the slope.  Our leg muscles and ankles began to ache as we walked at a slanted angle on down the trail.

Finally the trail began to level out and follow along above a small stream.  As we neared NY 79 the trail turned to the right and came to a long low bridge.  We stopped to take a few pictures and then made our way across.  On the other side a kiosk stood well back from NY 79.  Cars whizzed by on the busy road.  I walked up to the edge of the road to take a few pictures.  Before turning back I noted a pull-off area a short distance down the road; this would be a good parking place for my next hike.

We left the busy road behind and headed back across the bridge.  Once across and back in the shade we stopped for a break.  We continued on and made our way slowly up the angled climb ankles and muscles aching again, but this time on the opposite side.

After a long slow slog we found ourselves back at the top of the field near Blackman Hill Road.  We waded down through the tall grass to the road and crossed over to the other side.  Upon reaching the other side we dropped our packs and rested again.  After a short break we set out again.

We made our way back across Level Green Road and came to the sharp turn to the right and the straight path.  Shortly after the trail jogged to the left down a small slope and then immediately climbed back to the right to continue on the straight path.  Tim was tired and sore and slogged up the slope; stopping frequently to catch his breath and rest.

We still had about one mile left to go.  It was getting late, although we still had several hours of light left.  I told him that even if he was just moving slow we were still making forward progress.  We pushed on and came to a sharp left turn.  From there we followed the small tractor path along the edges of the field down to Old 76 Road and my car.

Since this hike Tim has lost over 40 pounds and has kept it off.  He has run many half-marathons and a few full marathons.  I invited him on several other hikes as I trekked across NY state on the FLT.  He joined me on a long 21 mile hike, mostly road-walk, to complete the eastern terminus of the FLT in the Catskills.  In 2016 he moved out of the area, but on his last visit we planned a “short” 14 mile hike; completing the new Hoxie Gorge reroute on M20.