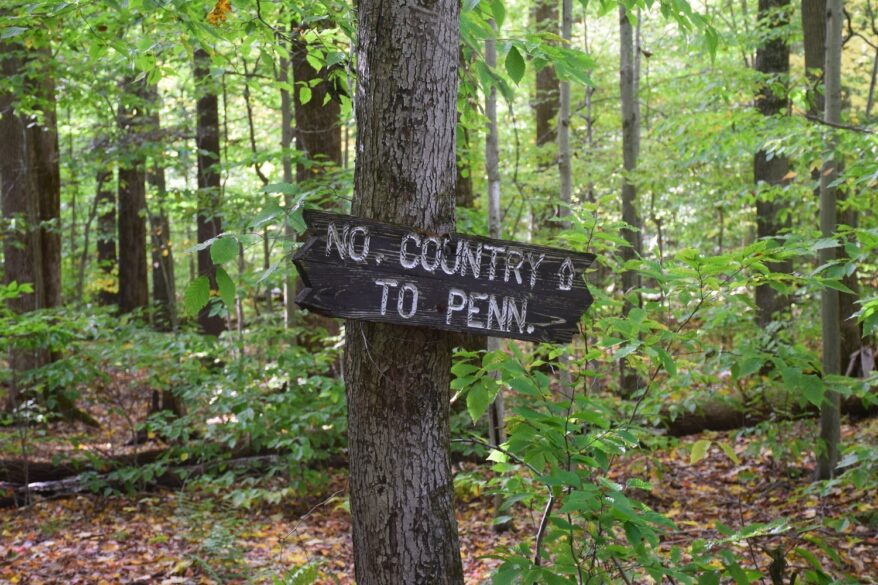 The final hike to complete my end-to-end journey on the Finger Lake Trail began in a rush. Arriving home, quickly packing, and leaving the following day to arrive at Allegany State Park. I was joined on this hike by my girlfriend, Mary-Margaret, my son Dilan, and my friend Tim.

We rented a cabin in the State Park and planned our hike for the next day. The night before the hike temperatures dropped to near 30. I awoke in the middle of the night shivering; the fire had burned down. After restarting the fire I caught a few hours of sleep.

Having gotten little sleep we were slow to start and were running behind schedule. In our rush to pack, we had forgotten a number of items. While Tim and I hiked the first half of the trail Mary-Margaret and Dilan went shopping for the missing supplies.

The trail took Tim and I to the NY/PA border quickly. From there it wound its way through brilliant fall foliage under a beautiful blue sky. We crossed several small streams before arriving at a large footbridge over Wolf Run.

After leaving Wolf Run we climbed up Mt Tuscarora and down to the Willis Creek Lean-to. We passed a father and his young daughter just before reaching our turn around at Coon Run Rd where Mary-Margaret and Dilan were waiting.

We ate a quick lunch and then started off on the second half of the hike back to PA 346, Dilan joining us for this part. It was late and the sun was sinking quickly. We raced the sun setting a fast pace and only breaking for short periods.

As the sun sank behind the hills we finally arrived at the NY/PA border and the western terminus of the Finger Lakes Trail. After a few pictures we descended down the last mile to PA 346 to meet Mary-Margaret. My end-to-end out-and-back journey complete. 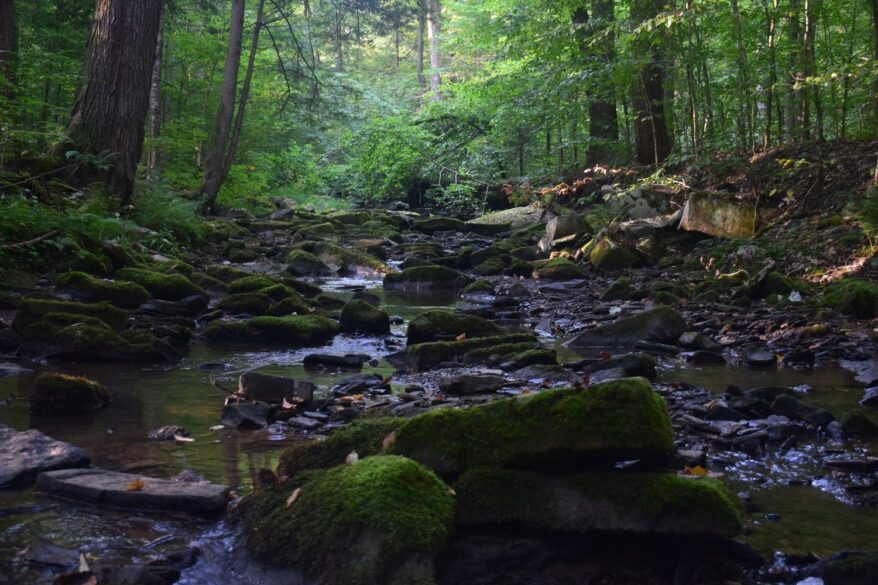 I began my last pre-dawn hiking start in the quiet darkness of early morning. Just before 4:30 AM I left my house for the long drive to Allegany State Park. By the time I arrived at the trailhead the sun was up and shining through the trees.

The first part of my hike took me a short distance west to Coon Run Road. A short distance before reaching the road I arrived at a well-made footbridge over the stream. I took several pictures of the stream and then made my way to the dirt road before heading back.

The second part of my hike headed east and took me up Mount Oneida. I passed by an old dilapidated lean-to and discovered its new replacement a short distance beyond. The trail continued on through the forest and came to an old grassy logging skid. After walking down the old road I crossed ASP 1 and continued on up to the blue trail junction and my turn around.

I reached the turn around and continued back. The weather was warm and wonderful smells of early fall wafted through the air. Soon I was back at the new lean-to. After a short break I continued on and encountered another hiker travelling the same direction as I. We walked and chatted and met another hiker heading the opposite direction. He intended to camp at the lean-to.

We descended down from the top of Mount Oneida and encountered a trio of hikers also planning to camp at the lean-to. After arriving back at my car I headed back to the cabins in the Quaker area of Allegany State Park to explore where I planned to stay for the final hike. 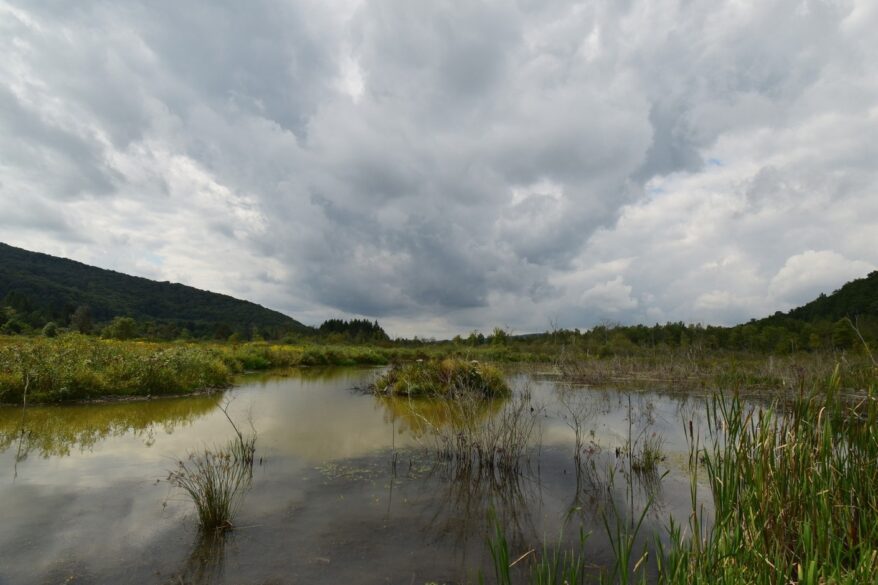 I started my hike from the large parking lot next to the casino in Salamanca. The air was cool, clouds hung low, and fog wrapped around the hills. The trail led west away from the casino through a power line right-of-way. I picked my way around many wet and muddy areas before finally arriving at Breed Run Road.

After reaching Breed Run Road I followed the road to an unnamed dirt road where I met four Seneca Nation youths. Their leader, Cory, told me about the trail ahead. The trail took me up over the hill and then down to Hatchery Road. Hatchery Road curled around a pond and beaver lodge before leading me out to ASP 2.

I followed ASP 2 to Bay State Road and then onto FLT Map M1, the last map I needed to complete. I climbed up over a hill and down to Beck Hollow Lean-to. After cleaning up the lean-to area I continued on and encountered a pair of couples from Ontario. A short time later I meet a trio of women.

Upon reaching my turn around I headed back to the lean-to for lunch. I met the three women at the lean-to, also eating lunch. They continued on, but I caught up to them once again near Bay State Road. From Bay State Road, I made my way back up ASP 2 to Hatchery Road and up a steep climb over the hill.

I came back down the hill, past the area where I had met Cory and his friends, and back to Breed Run Road. Just after leaving the road I snapped a picture of a Monarch butterfly on a stalk of goldenrod. I continued on back to the power line right-of-way. Once again I picked my way past many wet and muddy spots and finally arrived back the casino parking lot.