The Sixth Hike (Last Hike Of The First Year) 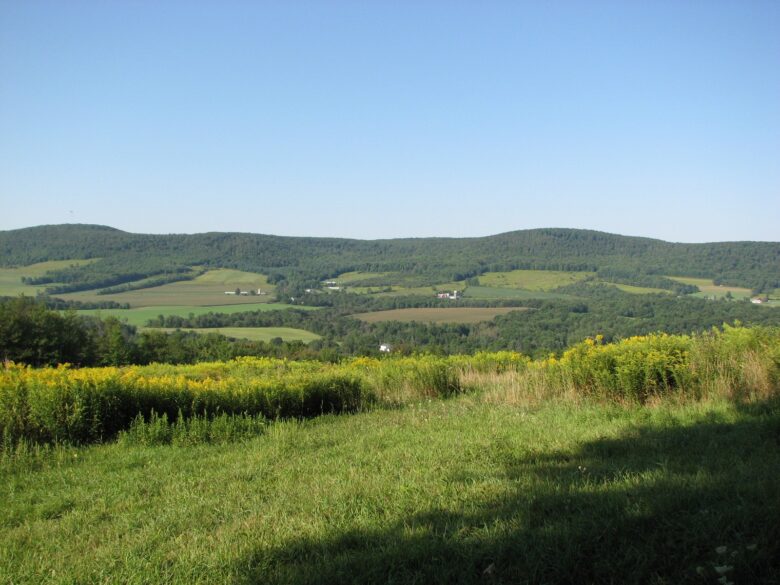 Authors Note: I am writing this in March 2018 and much of this hike has faded from my memory.  I do not recall whether I knew this would be my last hike or not.  Looking at the pictures I took and at Google Earth has helped remind me of a few parts of this hike, but sadly many of the memories are lost to time.

It was the end of August and my opportunity to hike was nearing an end.  Fall would be arriving soon and with it hunting season.  My previous hike had been a difficult and painful 20 miles.  I was not eager to tackle another hike of that distance yet, so I mapped out a slightly shorter 16 mile hike.  It was only four miles shorter, but those four miles were hard miles.

The day of my hike dawned bright and sunny.  It was still cool, in the upper 50s, as I loaded my gear into my car.  The forecast was for highs in the low 80s; a perfect day for a hike.

I arrived at the northern side of the Jim Schug Rail Trail and parked in the small dirt and gravel parking area near a wooden fence that bordered it.  After pulling on my boots and shouldering my little backpack I started up Lake Road.  I soon arrived at the trailhead and turned right across a field leaving the road behind me.

The trail entered the woods and began a climb up to the top of a small hill.  After a couple of switch-backs I reached the top and turned to the right to descend back down.  The trail came to a field and turned to follow along the top.  An expansive view of the valley and hills opened out before me.  I could even just make out the tall microwave tower on top of a hill that I had passed by on my previous hike.

I crossed the rest of the field and then entered the woods on the far side.  The trail wound its way around, turned to climb slightly up past another field before curving around again to head back down along the other side.  After a short descent it turned sharply back on itself and began to climb back up another hill.

The trail continued to meander its way along, climbing and descending as it wound around the hill.  An opening appeared before me and I came to a power line right-of-way.  I took a quick picture looking down the clearing before making my way across the open area.  Finally I began to descend and passed through a few switch-backs before arriving at Daisy Hollow Road.

A pathway had been mowed through tall goldenrod between two FLT signs.  I made my way to the road, well-paved with a double yellow stripe down the middle.  The trail turned to the left and headed up the road.  I continued on up around a bend in the road, climbing slightly as I went.  One-half mile later I arrived at the next trailhead.

A small parking area sat back in the woods up off the road.  It looked relatively new.  The mounds of dirt at the back of the parking area had no grasses or weeds growing on them.  I thought to myself that this would have been a great place to begin a hike from; the area was shaded and off the main road.

I climbed the little driveway up to the parking area and continued on out the back following the white blazes.  The trail came to a small stream and continued to follow it along before turning to the right and crossing.  Sun filtered down through the trees casting streamers of light through the air.  I attempted to take a picture of it, but the pictures did not turn out as I had hoped.

The trail continued to follow along another branch of the small stream before crossing over again and continuing up a hill.  As I climbed I came to an area carpeted in bright green ferns.  The deep brown of the trail traced its way through the green carpet on a slant up the hill.

A few minutes later I arrived at Owego Hill Road, nothing more than a single-lane dirt track.  I took pictures of the crossing and continued on still climbing slightly on my way to the top of the hill.  After reaching the top the trail made two long switch-backs down the hill before leveling out and following along beside a field.  At the corner of the field the trail turned to follow along just beyond the top.

Shortly after leaving the field behind I came to another dirt track road, Hillsinger Road.  Again I took a few pictures of the crossing and headed on across.  The trail turned to the right and started to gently descend.  Ahead of me I could see an opening and a house; it seemed that the trail was heading straight for the house.  Just before reaching the house the trail turned and followed around the outside of the yard.

The yard transitioned into field and I continued along beside it in the woods.  The trail began to pull away from the field and I soon lost sight of it.  A few minutes later I came to a sharp turn to the left.  After making the turn I walked a short distance and came to a sign posted on a tree.  It warned of steep sections ahead and advised that ropes had been installed to assist hikers in navigating the difficult terrain.

I continued on past the sign and turned sharply to the left once again.  The trail began to descend quickly and I came to the steep section that the sign had warned about.  Although it was steep, it did not seem to be as steep or as difficult as the section of trail between NY 96B and Coddington Road that I had navigated in May (The Second Hike).

I made my way down the trail carefully, using the ropes in a few of the steeper areas. Finally the trail leveled out and I made my way across a small stream.  A short distance on the other side I came to another rope.  This one leading up to Babcock Hollow Road and my turn-around.  The incline was steep and the trail was loose dirt and stone.  I gripped the rope and pulled myself up to the roadway.

Babcock Hollow Road was a paved road, but with no center line.  I noticed a car parked at the side of the road a little ways down from the trailhead.  I wondered if the owner was hiking and then noticed that there was a driveway and house sitting on the opposite side of the road; perhaps visiting instead.

I took a few pictures of the crossing.  Although the car was parked on the side of the road a little ways away, there really was no shoulder on which to park.  I looked in both directions, but I would not be parking here on my next hike.

On the other side of the road a small foot-bridge had been built to help hikers over a deep ditch.  I decided it was a good time to take a break.  I crossed over and sat down on the little bridge.  After a drink and a granola bar I was ready to head back.

I made my way down from Babcock Hollow Road and across the stream.  At the steep section I used the ropes to pull myself up the slope.  I continued on and finally found myself back at Daisy Hollow Road.  I headed down the road to the southern trailhead and took a few more pictures of the road and the trailhead.

It was late afternoon by the time I slogged down the hill to the field along Lake Road.  I still had to make my way across the field and then down Lake Road to the Jim Schug Rail Trail, but I was almost there.  My feet and legs hurt and I was tired.  I stopped to take a few pictures looking down on the field.  As I entered the field I took a few more pictures looking across toward Lake Road; much as I had done on my previous hike.

I arrived at Lake Road, turned to the left, and trudged down the road.  The hard pavement unforgiving on my feet and legs and they ached with every step.  Finally I could see my car ahead of me parked in the small parking area along the rail trail.