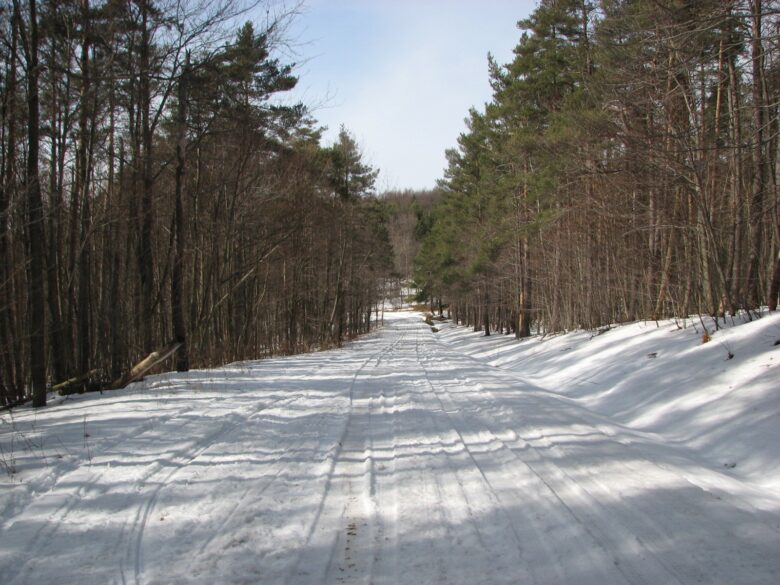 Authors Note: I am writing this in March 2018; seven years after the events of this hike.  Many of the memories of my early hikes have faded, but this one stands out very clearly for me.  Most likely because of the unplanned events.  Sometimes all you can do is laugh.

Winter was beginning to lose its grip in March 2011 and I began to think about hiking.  The days leading up to the hike saw highs near 60.  My friend Tim also wanted to get back out on the trail, so we planned a short hike for the weekend.  I mapped out a hike of eight miles from Van Donsel Road to Babcock Hollow Road (my turn-around from the previous year) and back.

The weather for the day was decent by late winter standards, with highs in the low-40s.  We set out for Van Donsel Road, Tim driving; his car had snow tires which might be needed on the back roads.  We made our way north and turned onto NY 392 passing by Greek Peak Mountain Resort.  Not long after we turned onto Van Donsel Road.  It wound its way along, and up and down over hills.  The pavement ended changing to dirt and gravel.

We descended a hill and passed by a house on the right set back in a large open field.  Ahead the road entered some trees and made a little jog to the left and back again.  Just beyond a driveway headed off to the left and a seasonal limited use sign marked the end of the plowed and snow-free road.

Beyond the sign the road narrowed.  The snow on the road packed hard by numerous snowmobiles.  We decided to venture on since the snow was packed solid.  Tim slowly pulled his car ahead and we continued on.  The road turned to the right and began to climb.

About one-half mile past the seasonal use sign we found the FLT markers for the trailhead.  The narrow road prevented us from turning around, so we continued on past looking for a wider area.  Not far beyond we found a wider area and Tim was able to do a K-turn and point his car back down the hill.

He pulled to the side… and the car tilted and sank.  The snow in the center of the road had been packed down hard by the snowmobiles, but the sides had only filled in with falling and blowing snow.  The snow had thawed and re-frozen with the changing temperatures, so it seemed solid for me.  I came to the late realization that a car weighs a lot more than I do; my jumping proved nothing.

We tried to rock the car free, but only managed to sink it deeper into the snow.  We shoved branches and logs under the tires, to no avail.  Finally we were forced to admit that the car was stuck.  Our only option left was to find a tow truck.  Tim called for a tow truck and we walked back down the road to meet the driver.

When the tow truck arrived the driver and his assistant did not want to try to drive up the road to where Tim’s car was.  We had to badger and argue with them to get them to bring the truck up.  They turned their truck around and backed up the road.  The truck slipped and slid a few times as they backed their way up the road.  At one point they appeared to be stuck and we feared that they would give up and drive off.  Finally they made it to the car and hooked it up.  The truck eased slowly forward and pulled Tim’s car back onto the hard packed snow of the road.

As they were pulling the car free two men on snowmobiles came down the road.  They slowed as they neared us, lifting the visors on their helmets to glare at us.  They vocalized their displeasure, telling us it was “bullshit”.

The tow truck towed the car back down past the seasonal use sign to the clear road and dropped it there.  We had to pay an extra fee over and above what had been quoted to us, something we grumbled about, but we were glad the car was back on clear road.

Upon reaching the trailhead we turned right following the trail west.  The snow, over our knees in places, caused us to slip and slide as the trail descended.  In some ways it was fun, we could hop and slide our way down.

We crossed over a running stream, the water bitterly cold, but thankfully not very deep.  Finally we came out on Odell Road and turned left to follow the road to the south.  The road plowed and snow free, but only a small dirt road.

A short distance down the road we arrived at the intersection with Baldwin Road.  Just beyond the intersection stood another seasonal use sign.  Piles of snow just beyond the sign blocked further progress by cars.  We navigated around the piles and a short distance beyond the trail turned off the road.  It was nearing 4 pm and the sun would be setting soon.   We had a climb back to Van Donsel Road that would take time, so we decided to turn back.

Before starting back we stopped for a quick drink and a snack at the intersection.  After a short walk up Odell Road we turned right and started the climb back up to Van Donsel Road.  We slipped and slid backawards as we climbed.  It seemed as though for every two steps forward we slid back one.  The hike down had been fun in some ways, but this was not as much fun.  Finally we were back on Van Donsel Road, our legs sore for the slipping and sliding.