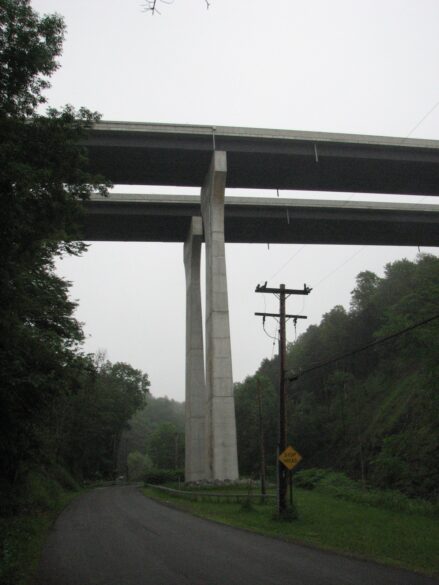 Authors Note: I am writing this in May 2018.  A lot has faded from my memory, however I do recall a few moments on this hike.  The FLT has since been re-routed and no longer goes through Blodgett Mills, up Hoxie Gorge Road, and along the road-walk on Underwood Hill Road.

The forecast for my hiking weekend was not ideal; cloudy skies with a chance of rain on both days and temperatures ranging between the 60s and upper 70s.  Saturday appeared to be the worse of the two days with a chance of thunderstorms.  I had not hiked in wet weather previously so I decided to give it a try; and I really wanted to get back out on the trail.

This hike would also mark a milestone for me; the trail would take me under I-81 which was my east-west boundary.  I had driven west for all of my previous hikes.  All of my subsequent hikes, until I reached the eastern terminus, would take me east.

I mapped out my hike plan from Blodgett Mills to a DEC Truck Trail in Baker School House State Forest and back.  My longest hike to-date had been 20 miles in July of the previous year.  The three hikes since then were all under.  I decided I could add some additional mileage since a large portion of this hike was road-walk.

I got an early start and headed north on I-81 to Blodgett Mills.  At Marathon I left I-81 and continued north on US 11.  The road took me past Hoxie Gorge Road and I noted the FLT sign; soon I would be making the long road walk down US 11.  The intersection for Blodgett Mills Rd appeared ahead on my left and I turned and crossed the bridge over the Tioughnioga River.

The US Post Office that Tim and I ate lunch at on the previous hike sat to the left.  I continued on past and over the railroad crossing.  On the other side of the tracks I pulled my car to the side of Main Street and parked.  It was not even 7 A.M. yet and everything was quiet and still.  Fog hung over the hills and seemed to soften the sounds around me.

After putting on my boots and pulling my pack onto my shoulders I made my way back across the railroad tracks and over the bridge to US 11.  At the intersection I stopped to take a few pictures before turning right to head south on US 11.  It was still early and there was little traffic on the usually busy road.  I moved quickly along the shoulder of the road as a few cars whizzed past me.  A little over half-an-hour later I finally saw the intersection of Hoxie Gorge Road ahead of me.

I turned left onto the road heading east.  A short distance ahead of me I saw the pair of massive bridges that carried I-81 over the road and the deep gorge.  I stopped to take a picture, craning my neck to look up.  I continued on, passing under the bridges as the rumble of cars overhead echoed down.  A short distance later I came to a split in the road.  Hoxie Gorge Road continued on to left left and Freetown Hoxie Gorge Road angled to the right.

I continued on along the road to the left as through the deep gorge.  Houses appeared here and there quietly watching the road as I passed by.  The road began to gently climb and a short distance up the climb a driveway led up to my left and the pavement ended.  Ahead was a single-lane dirt road.  I continued on up the narrow dirt road a few more yards and arrived at the trailhead.

Although the sky had lightened a little, the sun was still hidden and the clouds still hung low.  I stopped to take a few pictures looking further up the road and back behind me.  A large sign noted that The SUNY Cortland Nature Preserve was located up the road from me.  After over 3 miles and nearly an hour of road-walk I finally left the road and entered the woods.

The trail descended and followed along next to a small stream.  Light raindrops pattered on the leaves above me.  I paused to take a couple of pictures where the stream tumbled over some flat rocks creating tiny little waterfalls.  I continued along in the damp quiet of the woods as the rain continued, my head down, tromping along.  My eyes on the trail, I nearly walked into a spider web covered with rain drops.

A few minutes later I came to a fog shrouded field.  The light rain had stopped, but that only helped to increase the fog.  The trail turned to the left, but I stopped and stepped out into the field to take a few pictures.  I returned to the trail and followed it as it wound along the edge of the field.  The trail turned to the right and continued on down a hedgerow between two fields.  Midway down the hedgerow the blazes directed me left across the center of the field.

Fortunately a path had been mowed across the field because the fog was so dense I could not see the other side of the field.  I tromped across the field through the wet grass.  Near the middle of the field I came upon a picnic table and I stopped to look around.  All I could see was a wall of fog.  The damp air had softened the sounds around me and I felt a little bit unnerved; as if I had stepped into some alternate universe.

I pressed ahead straining to see the edges of the field.  Finally I arrived at the other side of the field and turn left to follow along the edge.  After making a right and then a left turn to continue along the edge of the field I reentered the woods.  The trail immediately turned to the right and followed along near another field, this one not in use and beginning to look overgrown.

I came to a small connection between two fields and made my way quickly across.  The trail continued on around the edge of the field and then left the field behind as it headed back into the woods.  It continued to wind along and then began a gentle descent past a few more fields.  After passing a third field the trail arrived at Underwood Hill Road.

The road was a small paved road with no center line.  Fog hung low over the road.  I took a few pictures, but the moisture in the air had coated my lens and added layer of fogginess.  My path could take me either right or left on the road, either direction would take me around to Baker Schoolhouse Road.  I decided to go right and began my road-walk.

The road descended gently down to a T-junction with Stone and Atkins Roads.  The two roads were physically the same road, but Stone Road headed to my right and Atkins to my left.  I turned left onto Atkins Road and continued down the road.

Atkins Road continued to descend and passed between fog covered fields.  Ahead I saw the intersection with McGraw Marathon Road and beyond hills climbed up into the low clouds and fog.   McGraw Marathon Road was a larger paved road with a center line and narrow shoulders.  I turned left and began a gentle climb up to my next turn, Baker Schoolhouse Road.

A house sat quietly at the corner of McGraw Marathon Road and Baker Schoolhouse Road.  I walked by the house and turned right.  The road passed beneath a canopy of trees and continued on up to the trailhead.  Rain began to sprinkle again as I slogged up the road.  A little less than a mile later I arrived at the trailhead.  I turned left off the road and began a climb up through rows of trees.

The rain returned and began to drip through the trees and patter on the ground around me.  I was soaked and finally I decided I had had enough.  My planned turn around was the next access point, but I was tired of walking in the rain; I was wet and sore.  I turned around and headed back down Baker Schoolhouse Road.

The rain began to let up as I walked down the road and when I arrived back at McGraw Marathon Road it had stopped once again.  There were two routes to get to this point; I had taken the route down Atkins Road, so I decided to take the other route on the way back.  I turned right on to McGraw Marathon Road and made my way to Underwood Hill Road.

I turned right into the woods leaving the road behind.  The trail climbed up past the fields and curled it way around beside and through the fields.  Finally I arrived back at the large field that I had passed through earlier.  The wall of fog had lifted and I could see the sides of the field clearly now.  I reached the middle of the field where the picnic table sat and decided it was time for a break.

I pulled off my boots, stripped off my wet socks and shirt, and hung the wet clothing on the table.  While I ate my lunch the sky began to lighten and the sun attempted to come out.  Hoping to dry out a little and get some of the sun’s warmth I lay down on top of the table.  The sun was short-lived and soon disappeared behind the clouds again.

After changing into a dry shirt and dry socks I reluctantly pushed my feet back into the still wet boots.  My new dry socks would not stay dry for long.  I picked up my pack and started off across the rest of the field.  I continued on into the woods and past the first field that I had first stopped at earlier.  The trail wound along past the stream and then started the climb up to Hoxie Gorge Road.

The rain remained absent and the sun continued to try to break through periodically.  Ahead of me lay the long road-walk back to Blodgett Mills.  I decided to take a short rest break and sat down on the dirt and gravel road for a drink and snack.

After finishing my break I pulled my pack on and started down Hoxie Gorge Road.  I passed under the massive I-81 bridges once again and soon found myself back at US-11.  I waited for traffic to pass and quickly crossed to the other side and then began the long walk.  Cars whizzed by in both directions as I plodded along up the road.

Finally I saw the intersection for Blodgett Mills and made the left turn to cross the bridge.  I could see my car parked ahead on the right side of Main Street.  I made my way across the bridge, over the railroad tracks and then across the road to my car.  After trading my wet socks and boots for sandals and a changing into a dry shirt I lowered my sore body into the driver’s seat.  My feet were all “pruney” and getting out of the wet socks felt good.  I started my car, turned around, and headed home.

2 thoughts on “Under The Interstate”