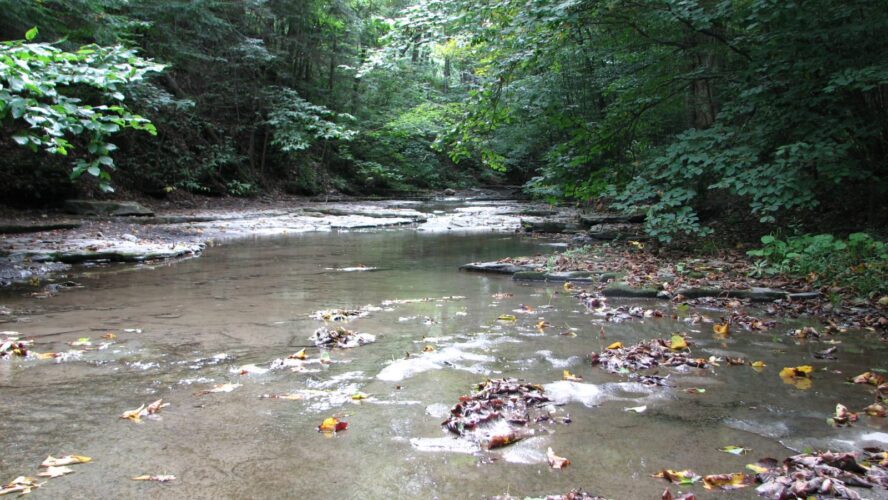 * Day 1 track was accidentally deleted while resetting the GPS, no mileage notations in the write-up.

The first day of my overnight hike started out a little foggy on the drive to the trailhead, but by the time I reached the parking area the fog had lifted (9:15 am), although it was still overcast as the fog had not yet burned off.  I parked just off Vanzandt Hollow Rd, at the intersection of Templar Rd.  I planned to hike east to Watkins Glen State Park and then back and camp at the Buck Settlement Lean-to, which was about one mile up the trail from the Templar Rd access point.

The trail left Vanzandt Hollow Rd and headed east high above a stream (9:35 am).  In several places the side of the cliff had fallen away and the trail nudged right up along a very steep drop; anyone with some fear of heights would find this section of the trail quite unnerving.

The trail turned away from the cliffs and headed down towards a stream, Julia’s Crossing.  A sign had been posted just off Vanzandt Hollow Rd warning that Julia’s Crossing was unpredictable and flooding could not only make the crossing impassable, but could also remove or alter markings and visible signs of the trail; the sign was accurate.  It took me several minutes to find my way across the stream bed and find the trail on the other side.

After leaving the dam I continued on, the fog that had been hanging in the sky finally began to burn off and I was greeted by blue sky and bright sunshine.  I passed near a 4-H camp, and although signs had been posted on the trail stating that camp was in session it was quiet.  After passing the 4-H camp I came to a bridge and some rock steps (10:44 am) that led me up and on to Whites Hollow Rd.

The trail now turned down Punch Bowl Rd.  There was a gate at the end and several cars had parked nearby.  The trail was quite gentle and easy to walk on from here.  It followed the road only for a little ways and then turned off and not long after I came upon a large pavilion.  I continued on past, but planned to stop there on my way back for lunch.

I began to encounter more people as I got closer to Watkins Glen.  The trail now was wider and smoother; much less the rugged FLT I was so used to, and more like the trails that one finds in State Parks, which was exactly where I was.  I crossed under a railroad bridge, stopped to take a few pictures before continuing on (11:27 am).

I was now well into Watkins Glen State Park, I could hear people below me on the trails in the gorge.  The blue sky and bright sun had now disappeared behind a wall of clouds and it looked as if it might rain.  I met more people along the rim trail that I was walking along.  I continued following the white FLT blazes down through the park and finally out onto Old Corning Rd (11:56 am).  I walked down the side of the road to the main entrance of the park, paused a few minutes and then headed back.

After climbing back up to the rim trail I passed by some old round stone tables (12:12 pm).  I stopped to adjust my pack and take some pictures.  There were perhaps a dozen of these tables scattered around and I wondered at what their purpose might have been; perhaps some fancy outdoor dining area in days past.  As I left the park behind me the number of people on the trail dwindled and soon I had the trail to myself again.  I stopped at the large pavilion I had passed by earlier and eat a quick lunch; the sky was still gray and unfriendly and I chose not to linger (1:14 pm).

I made my way back past the dam and on to Julia’s Crossing.  Even though I had passed through earlier it was still a bit of challenge to find my way back across going the other direction.  The trail then climbed back up to the cliffs and finally back out to Vanzandt Hollow Rd.  I stopped at my car to pick up some supplies that I would need for my overnight stay and then continued on to Templar Rd.  I met a couple at the trailhead on Templar Rd, they had just pulled up and parked and were heading out on the trail.

After leaving Templar Rd I crossed over a little stream and near a waterfall – called Ebenezer’s Crossing (3:13 pm).  There was a small camp site that had been built here and if the lean-to wasn’t available I considered coming back to it.  The trail climbed up from the stream and I soon came upon the old Buck Settlement cemetery.  There was a grave of a Civil War soldier here, from the 14th NY Regiment, heavy artillery.

I arrived at the lean-to (3:41 pm) and the sun finally broke through again; it was a welcome sight.  I dropped my pack and hung my hammock from the rafters in the lean-to.  After grabbing some water I proceeded to gather firewood.  I once heard Bear Grylls say that you should gather as much firewood as you think you need, and then do it again.  My own experiences camping while growing up taught me that as well.  I gathered several loads of firewood and then took a rest break and went again.  Now I could finally take my boots off and relax.

The rest of the afternoon was spent getting things organized and ready for the evening.  There was a small stream nearby and I walked down to it with a wash cloth and cleaned up a little.  The water was cold and made me gasp.

Near 6 p.m. I decided to start the fire and I soon had a nice fire going and a bed of coals building up.  I was cooking my dinner by 6:40 p.m., hot dogs and beans.  Somehow it always seems to taste better when cooked over a fire while camping out.

The sun was sinking below the hill behind the lean-to and the shadows began to grow longer.  I listened to the chirp of the crickets and the snap and pop of the fire as the darkness slowly grew.  I had expected that I would be lulled to sleep by those sounds, but it turned out there was a concert up at the Watkins Glen race track and as the air grew colder the sound traveled better I could hear the concert almost as if I were in the back row.  The music continued until after 9 p.m.  After the last notes of the concert faded I looked up and saw a bright half-moon rising from the hill behind me.  I decided to turn in and I was asleep by 9:30 p.m.